Apart from similarity, the shape of a polygon with three edges and three vertices, a triangle, is completely determined by the angles, because similar triangles keep the same ratios between their sides.

As the angles of a triangle add up to 180°, in a triangle which has one angle of 90 degrees, the sum of the two acute angles is 90 degrees.

In other words, the third angle is fixed, provided that the two other angles are known.

Moreover, if we know the angles, then the ratios of the sides are determined, irrespective of the overall size of the triangle.

And in case the length of any single side is known, then the other two sides can be calculated.

It follows that all other angles and lengths are determined, once the value of a single angle and the length of a single side and are known.

The aforementioned ratios are given by the trigonometric functions which you can find below.

The following depiction of a triangle shows the hypotenuse h, the adjacent side a as well as the opposite side o: 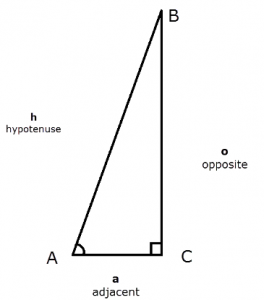 Frequent calculations on trigonometricfunctions.com include, for example:

The sine of an angle is defined as the ratio opposite/hypotenuse, and for the sine the abbreviation sin is the rule.

sin A = o / h
The inverse of the trigonometric function sin is the arcsine, and the reciprocal of the sin is the cosecant, both of which you can find by reading on this page.

The cosine of an angle is defined as the ratio adjacent/hypotenuse, and for the cosine the abbreviation cos is common.

cos A = a / h
The inverse of the cosine sin is the arccosine, and the reciprocal of the cos function is called secant. Keep reading this article to learn about both of them.

The tangent of an angle is defined as the ratio opposite/adjacent, and for the tangent the abbreviation tan is prevalent, but tg can also be seen.

tan A = o / a
The inverse of the trigonometric function known as tan is the arctangent, and the reciprocal of the tan is the cotangent. They, too, are explained further below.

The cotangent of an angle is defined as adjacent/opposite, and for the cotangent the abbreviation cot is the most frequent. The short forms ctg, cotg and cotan can also be found.

The secant of an angle is defined as hypotenuse/adjacent, and for the secant the abbreviation sec is common.

sec A = h / a
The inverse function of the secant is the arcsecant, and the reciprocal of the sec is the cosine. You can find about the arcsecant in the section inverse trigonometric functions.

The cosecant of an angle is defined as hypotenuse/opposite, and for the cosecant the abbreviation csc is the rule.

csc A = h / o
The inverse of the cosecant is the arccosecant, and the reciprocal of the csc is the sine function. To learn about the cosecant read our paragraph inverse trigonometric functions further down. 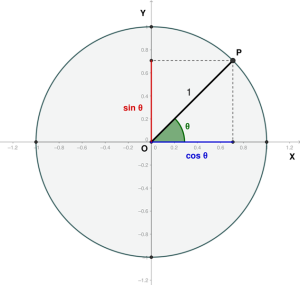 So far, for the ease of the triangle definition of the trig functions, we have been measuring the plane angles in the unit degree, denoted by °. However, the standard unit of angular measure is the radian with the symbol rad.

All the six trigonometric functions are periodic, with a period of 360 degrees / 2π radians except for the tangent and cotangent functions of 180° / π radian. Colloquially, this is refereed to as period of trig functions.

In the next section we discuss the inverse trigonometric functions, which are not periodic in the strict sense. Rather, in order for sin, cos, tan etc having an inverse function, the domains of the original functions are restricted to a subset.

The arctangent is the inverse function of the tangent, defined as x = tan(y), conventionally spelled as y = arctan(x). The domain of x for a real result of arctan(x) is $\mathbb{R}$, the set of real numbers. Its range of the usual principal value in degrees is −90° < y < 90°; in radians

Make sure to understand the difference between the inverse trig functions, just discussed, and the reciprocal of sin cos tan, which is ahead.

You have made it to the end of our introduction to the trigonometric functions sin cos tan etc.

We plan to add an article for each trigonometric function, along with a calculator.

On mobile devices the form is located near the end of this article as well as in the header menu.

For questions and comments use the form at the bottom, or send us a mail. And, make sure to install absolutely free PWA app (see menu or sidebar)!

Thanks for visiting our site dedicated to trigonometry.

Buy me a coffee